The One Who Is Thinking about Natural Behavior and Interested in Individual Differences, Alison Bell

How would you describe your background?

I’m an evolutionary biologist who is interested in behavior. I would say that I have always been interested in animals and animal behavior, but I didn’t really know you could study it in a scientific way until I went to college and I took my first animal behavior course as a freshman. I realized that what I was really interested in was thinking from an evolutionary point of view why animals do what they do. I’ve come to appreciate is that knowing something about how they do what they do is important to understanding why.

What is your favorite part of research?

My favorite part is asking the questions. I find that asking questions is a lot easier than answering them. Asking questions is really creative, liberating, and not constrained by data. I like the data analysis section too and the writing too but the synthesis and the asking what comes next? what don’t we know and why?

But what I also really like about doing research is you get to use a bunch of different skills in the course of a research project. From coming up with the questions, to collecting data and analyzing the data, and writing it up. You use different parts of your brain, different skill sets, put it all together and I feel like it’s a really is a holistic exercise. You’re not just doing the same kind of thing; you’re doing different things. Sometimes when you are collecting data it’s totally boring and repetitive, doing the same thing over and over again, but that can be kind of soothing and meditative. The writing part is a whole other set of skills, reading the literature is also very different. You’re also physically doing different things during the process.

What made the University of Illinois a good place to conduct your research?

This has been a really supportive and collaborative environment with great colleagues who are fun, friendly, interactive and open. The University has been very supportive for my changing needs and the lab’s changing needs. It’s always been willing to try and accommodate my requests like “Oh my, I need another fish room!” or getting support from my department to be able to get the kinds of space, instrumentation, and resources I need for my research. This has been a very supportive environment.

What got you interested in studying population and individual variance within populations?

I think it’s obvious to everyone that individuals vary, but that’s something we don’t often think about in science. Even when it’s so intrinsically obvious it’s easy to dismiss it as noise or irrelevant, but appreciation for its evolutionary implications helps to justify interest in it. Just knowing that individual differences are hard to explain from an evolutionary point of view makes them interesting to study. Like, why do individuals differ? I think it’s an intrinsically interesting question. What are the proximate causes of it and what is maintaining the variance within populations over time?

I’m not giving a very good answer to your question because “It’s obvious! Don’t you know?? Can’t you tell?? Don’t you know that if you have two dogs in your house it’s likely they are totally different from each other and isn’t that interesting?” It’s just obvious.

Can you talk about a time where were greatly challenged?

That’s a really good question, and I can give so many answers! What’s a good one? … There are easy ones like the experiment failed and you have to start over again or your paper was rejected and how do you bounce back from that?

I think this could be one of the things that would be useful for students to know about. In doing my Ph.D. work, I was the only person in my lab who was working with this particular animal and I was the one solely responsible for their care. So what it meant was that for the depth of my Ph.D. when I was most actively involved in data collection, there was about a three year period where I could not leave town because I was the one person who knew what to do, who was caring for the animals, and that was a huge responsibility. This isn’t really an example of failure but it is an example of being challenged because having to be that committed for a payoff that was uncertain was very challenging. It was just a big responsibility, but I am an animal lover and I wanted to be responsible for the animals I was taking care of, but it was a big pain.

It also influenced the way I set up my lab now. We all share responsibilities for running our animals and animal care. We divvied it out, divvy responsibilities among all the members of the lab. People sign up for a week to take care the animals and what that means is that not one person is responsible for everything all the time. We share it, and that decision to run the lab that way came very much from that experience I had as a graduate student.

What do you do in your spare time?

What do I do in my spare time? I have a husband and twins, who turned seven last month. They pretty much take up all of my time. I also have a committed ashtanga yoga practice that I do 5-6 days a week at five-thirty in the morning for an hour and a half. I do that before the kids are awake… and that’s it. That’s all I have time for -- my yoga practice, my family and work.

What’s a fact about you that people don’t expect to learn?

[…] I think people might be surprised to know that I grew up in a very rural small town in northern California. They think California doesn’t have rural small towns, but it does. Also, I give the impression of being a non-small towny kind of person. … I want to use the word hippy in there somewhere because the small town I grew up was kind of a hippy California commune kind of place. I didn’t grow up on a commune, but…

No, I get what you mean. It wasn’t a commune but close.

Yeah. It was a lot of back-to-the-land people.

If someone in the program, a student or a colleague, needed to refer to you but did not know your name, how would you prefer for them to describe you?

Uh, um. I think people would refer to me as one of the “fish people,” but … um… I guess I would like to be thought of as that thoughtful great scientist over there but... I… I don’t know. This is a hard question because how do you want people to perceive you?... If they want me on their committee or something I want them to think that I am helpful and thoughtful and thinking about natural behavior --  something about that. The one who is thinking about natural behavior. The one who is interested in individual differences. But at the end of the day, they’ll all probably refer to me as one of the fish people. 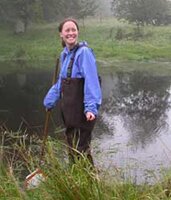